What about the blues?

All right! In XXI century, finally we had light upon this apparently little truth: that everything modern music has been doing well, it got an exceptional debt with the blues. What we call rock’n’roll is nothing but the most stupid riff (without seventh notes in the deep, but just three simplest accords in sequence) coming from the abyss of the blues. To be real, we should say that the blues is the music, the rythm and feeling of the blacks of America, and that is what we should recognize, if we would be able to be intellectually and humanly honest. Without the black presence, a white man can do nothing else than a folk repertory, talking about the closest shape of these songs of deep human intensity and hope for emancipation and progress of spiritual life. Sometimes some stupid says that the blues is the music of the devil, as it is: because you must study it with the devil, if you want to play a believable blues. But the blues is melted in a culture which is not dualistic, not reduced on the war of good against evil. Blues is consciousness. 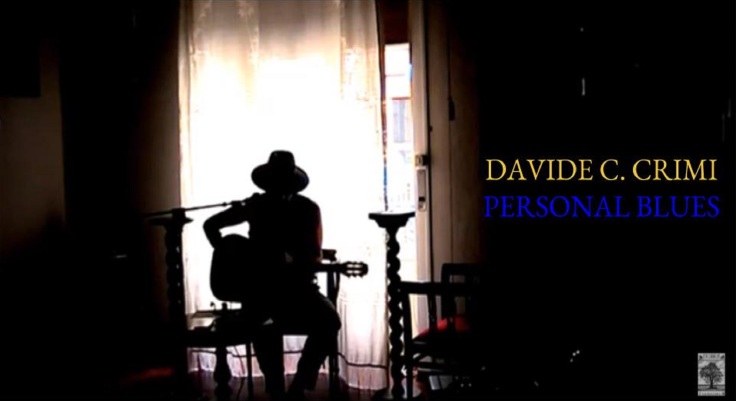 I’ve been playing my blues with a Gipsy guitar that I use to call “Jinney”, because she lead me somehow somewhere to the home of Jinney the witch in Camden Town, where in the place that once was her home, there’s a locanda named World’s End, and there I wrote the opening song of this collection. After all this attempt to tell you how I (didn’t) learn to play the blues, a black friend appeared and we made together a live exhibition to the Locanda Blues, during the 2018 Spring Equinox. But this is another story. Now we should concentrate our effort in exploring the possibilities of early blues, which is quite percussive. Maybe someone already knows that black people in Southern America invented the banjo when drums were forbidden by the law of white people: so they put a neck over the drum to say: “it’s not a drum, it’s a guitar“. Very soon they took true guitars, becoming the best players. The way I play here the guitar is very primitive, something like the way John Fahey said about the Charley Patton’s mood, but maybe the comparison is light years far away from my capabilities. Notwithstanding, what matters is that every guitar uses to play if you make something with her. And if you have a special feeling with, this is really ok.

The M FOUNDATION is an indie-pendent research center, expression of the current which interprets knowledge as light into the sphere of being. Open knowledge and give diffusion to light is the movement of freedom. In our time, this way to interpret life and knowledge is the open source mentality: opposite to oscurantist propaganda of the establishment which is inflating the meaning of each word of freedom, share light is to share information and developing a social consciousness able to observe in a critic way the form of economy, law, politic, culture and art. The internet synchronicity, the anthropological path to music and theatre, all the forms of sharing values and thoughts and experiences are transforming the way to feel the internal dimension of collective unconscious giving new meanings to our social intelligence.

2 risposte a "What about the blues?"