The Inaugural Conference (Middelburg, The Netherland, 2012)

with a link to the Book of Abstracts

with a link to the Non-Academic Beat Essay

MOLOCH XXI – THE MAKING OF

plural mys·tae\-ˌstē\ or mys·tai\-ˌstī\. Definition of MYSTES.: an initiate in a mystery (as in the Eleusinian mysteries)]

BEAT INFLUENCES IN THE MAKING OF MOLOCH XXI

MYSTES: A RITUAL IN NATURE

The EBSN Conference in Tangiers, 2014

Looking at beat literature through the prism of its utopian objective: to be a medium for reciprocal understanding, for the improving of collective awareness, introducing in popular feelings the possibility to change the world, transforming its social rules by using new technologies as instruments for emancipation. The essay shows its interdependance with former studies produced by the same Author for EBSN, shaped in this non-academic perspective.
.


.
To celebrate this third EBSN international conference in Tangiers, the current frame goes to identify some special and subterranean knots between Western culture and Islamic world. To make clear these knots, the essay identifies the special link underlying the Western avant-gardes and the medieval alchemy and troubadoric languages with Arabian sources. Performing this task, the Author indicates important references into the essay and he offers also his personal experience with Islamic world through the poem “Qur’an Thelema” Arabian.pdf, whose theme is how to find a mystical vision making substitution of drugs with natural tools, believing that this is not personal pleasure, but a way to create a new kind of people, involved in a cosmopolitan interpretation of life, able to interconnect by the new information and communication technologies, ready to create a new social intellect.
The theme of ecstatic vision finds a complementary shot with the other poem the Author will talk here, whose title is “The Lady and the Apple” Tangeri.pdf.
.

EUR/OPEN: a project with Cosmopolitan Attitudes

Dearest, I wish to focus your attention on this point, emerging from the very last session of the meeting and related to the effectiveness of the adjective “European” in use to qualify the network.  In reason of the present composition, with components from India, Russia and with a programming Third Conference which will be held in Tangiers, we have the improving feeling of the natural development – with deep roots within beat literature – of a cosmopolitan attitude.

Observing from this perspective, the geographic adjective quoted above may appear a bit restrictive.  Stating this, the term “international” was evoked in the debate, but immediately emerged another spirit of the beat literature, considering the national dimension as establishment, and therefore shifting towards a different shape, that is given by the word “transnational“.
While international seems to start from the original recognition of nations as borders to respect, and even when talking about cooperation the institutional side prevails, in a very different way transnational is linked to people, to the individual freedom to go inside, outside, before and beyond borders.
Anyway, “European” owes a different level of interpretation, that should be considered non just into the institutional “EU” framework, but in the cultural dimension, as far as the idea of Europe through centuries always represented emancipation of people, deliver from mistakes of the past, attitude to arts and sciences.
In a contemporary perspective, we may remember that modern Europe was created from the cry “nevermore”, coming through two world wars leaded by nations. The European Union, as everybody knows, in the beginning cannot enter into the cultural field.  Therefore it was constrained to the economic dimension (the “communitarian” cooperation on carbon and iron and, later, the single market).
–
.
Notwithstanding with this recent lineage, the idea of Europe carries on that strong cultural background, and even the present EU programs may be useful to enlarge the level of cooperation of a network like EBSN.  As shown during a meeting in Trieste past 16-18 Sept.,”Creative Europe“, for instance, it may be a key instrument to improve and enlarge the EBSN’s activities.  Recognizing Europe as a fragmented cultural space, this may take the shape of a laboratory for transnational circulation of works, including international touring, literary translation, etc.
The program quoted above is an instrument to contribute to create long-term audiences for European cultural networks, as EBSN is.
As it is possible to see from the general information, the program will support cooperation projects, literary translations, networks and platform.

Waiting for the moment to apply, allow me to give the signal of this simple contribution in dialogue at distance: with this wiki EUR/OPEN call for papers, we are promoting European Citizenship awareness. We believe the spirit of engagement and the fight for right are part of the European dimension and Beat culture, being a main key for the diffusion worldwide of this attitude, improving reciprocal understanding and respect, and we ask you to promote the knowledge of this call.

.
We consider the call a tool to improve cooperation between citizens, with the aim to create circulation of writings and therefore, thought.
–
Allow me to remind you some contribution that we create for the network, just like this improved (with photo and light cover) of the Abstracts Collection of the Inaugural Conference at the Roosevelt Study Center (Middleburg, August 2012) and the short movie “The Second Beat” made with images collected from the second conference held in Aalborg (August 2013).
.
settembre 19, 2013 1

The Non-Academic Side of Beat – A short essay 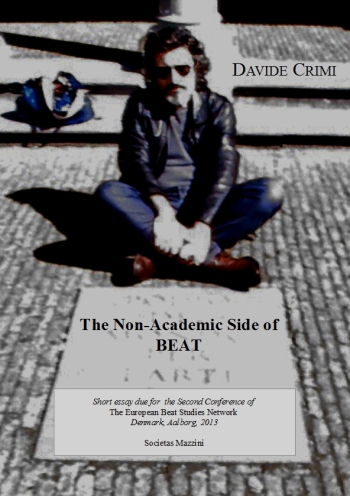 In attach the (draft) program